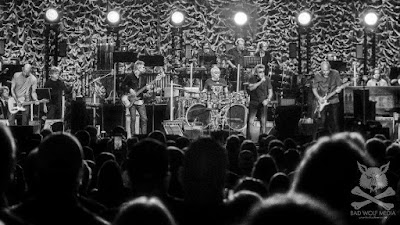 I NEVER THOUGHT I'd say this or write this or even think this ... but The Who is aging gracefully.

Thanks to Mike Sorensen and Bad Wolf Media (these are his amazing photos), I scored a ticket 20 rows from the stage last Thursday at the big amphitheater near St. Louis. It was amazing, of course. I'm a Who fanatic and always will be. They could have done a puppet show and it would have been fine. Of course, The Who would need to be billed above the puppet show, but onward ...

In fact, this tour is called Moving On. It's a grand experiment, with a full orchestra and big chunks from Tommy and Quadrophenia. I could only imagine the nightmare for the sound crew, getting the mix and microphones right. The band struggled early during the Tommy songs because they were basically playing in a  big shed and you could tell they couldn't hear well. 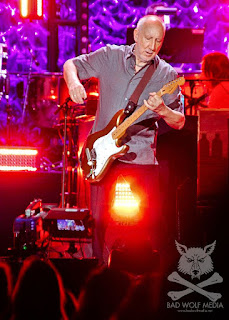 Much love to the incredible drummer Zak Starkey, who guided the band through a few minor setbacks and kept things together and from completely going off the rails. Roger Daltrey rushed his lyrics early and Pete Townshend kept barking at the sound crew to his left. The orchestra director just kept going and they got better as the night went on.

As I've played in bands for years and can almost never hear on stage, I can only say The Who didn't let it bog them down and it's a miracle they can play fantastic rock shows with the sound bouncing around.

Townshend and Daltrey are in the mid-70s, and it shows. Daltrey's voice has never been better, he never hit a wrong note and it was pure the whole night. Townshend fought sound issues, faulty guitars and a sore throat- he croaked his way through Eminence Front and I'm One bravely and without fear. God bless him!

The Who used to overpower audiences with sheer volume and energy, but those days are long gone. Townshend still windmills, Daltey still swings his microphone, but they do it less now and they are well aware the two-plus hours they are on stage are marathons, not sprints.

Simon Townshend, Pete's brother, was featured more this year on vocals and guitar and it makes the band better. The orchestra could be heard and the cello and violin on Behind Blue Eyes was right on target.

Favorite parts? The power chord intro to Who Are You, the searing instrumentals Sparks from Tommy and The Rock from Quadrophenia, Daltrey introducing Substitute by saying "I was born with a plastic spoon in my mouth" is one of the greatest lyrics ever, the incredible acoustic version of We Don't Get Fooled Again, and Love Reign O'er Me, which literally brought tears to my eyes.

The Who can't go on forever. Can they? They are indeed Moving On, and I'm grateful to Mike for letting me go on another rock and roll adventure.
Posted by Rodney Hart at 11:21 AM