A HUGE CONGRATULATIONS goes out to friend and fellow musical conspirator Adam Yates, AKA The Mighty One, AKA Just Call Him Deputy Chief. Adam was officially introduced today as the new Deputy Chief of Administration for the Quincy Police Department. That's quite a jump from Sergeant, and the department got it right - he'll do a fantastic job. 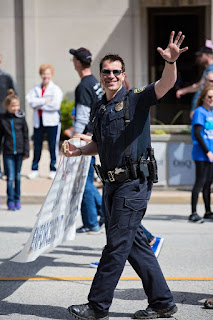 I assume the first thing he'll do is make all the officers listen to Stay Strong by 1/5 & Maine - he played drums and keyboards and sang and wrote half the songs. Since QPD has a chief and two deputy chiefs, that makes Adam a third of the command staff, and half of 1/5 & Maine. And a fifth of Pepper Spray (A Fifth Of Pepper Spray might be the name of the next 1/5 & Maine project). All I know is that he's 100 percent awesome and QPD is fortunate to have him.

Adam and his wife, Stef, are great people. The night he got the job, Stef said she wasn't surprised. "He's a born leader," she said. True dat!

We expect Deputy Chief Yates to be at our store party Saturday so stop by and congratulate him yourself. I suspect we might have a toast or five in his honor. If we have five toasts, the first toast with be 1/5 of the toasts. Geesh, all these fractions are confusing!

I may toast him early because he's playing with Tim Smith at Red Light Friday night. Never hurts to get a jump start on the party ....if you see him with Tim, compliment the new Chief Deputy on his cloud navigation skills, too.

Atta boy, Mighty One. It's an honor to call you a friend and musical collaborator .... and now Deputy Chief!