SO TURNING 55 was a good thing. We had another epic store gathering and our after-party, the Green Hour Lounge, was off the hook. Great music, friends, libations and laughter - you can't ask for a better time.

Probably my favorite part was seeing two former guitar students, Audra and Peyton, rocking away with us during the jam session. I was like a proud papa!

The Green Hour Lounge is the brainchild of Chris and Victoria Kelley. They used to host it fairly regularly, and basically it's just an open mic night where you can read poetry, sing a song, do a skit, present the news (Bill Miller style, it's tremendous) or be a goofball. By the time we got to the Green Hour Saturday is was a little later and most of the people had left, but for the 25 or so that stuck around, it was amazing.

What I liked the most about it was the diverse crowd. You had people from all walks of life with different backgrounds and beliefs, but it didn't matter - we were there to have some fun and appreciate the talent. One young woman in particular, Taylor, sang a couple of original songs that were just amazing, and I'm hiring her for some events next summer if she wants to do them.

It took awhile to clean up Sunday and the rest of the day was spent in recovery. But the worst part about getting older is that it hurts more two days later. It's not from misbehaving, it's from expending so much energy having such a good time.

We continue the not learning our lesson part of life this week with HartLyss shows both Wednesday and Friday night at Revelry in Quincy, and the annual Mays Thanksgiving feast Thursday. Saturday night is the tree lighting ceremony in Washington Park, and by Sunday it's suddenly December and we are really in the throes of the Christmas season.

So lets have fun and lets sleep when we are dead, and man, my back still hurts! 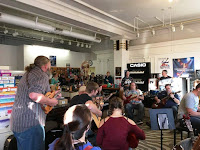 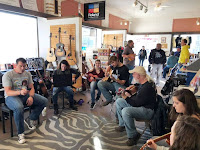