SOMEBODY RIPPED ONE of the signs off the wall beside our Second String Music entrance. We could tell because there is a hand-shaped bend and a huge bend on the lower half of the sign, like somebody was hanging on it and really had to work to pry it off. I found it this morning on the Maine Street side just around the corner against the building. Sheryl spent the morning straightening it and scraping the old super sticky glue off the back of it and off the wall outside. 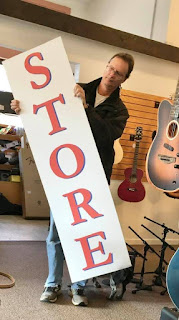 There are two signs on either side of the front door. One says MUSIC and the other says STORE. The Music sign is still attached. We tried to pull on it and it wouldn't budge. So somebody, or maybe more than one person, had to go to a lot of trouble to yank it off the wall. I want to believe it was just the wind but Sheryl says probably not.

Why? The more we ask this the less we seem to know. It just seems random and senseless. I think it was just some bored dirtball walking around downtown Quincy late last night. We've had all kinds of random acts of unkindness here at 5th and Maine.

One morning Sheryl found a cake that had been thrown against the front doors. Another time Rodney found a small bike and it had to be politely relocated down the block. Plants have been destroyed, cigarettes burned through planter boxes. We also had the tree out front replaced because someone liked to keep destroying the poor thing. We caught those two and the police knew them well.

Sheryl has ordered the outdoor double-sided tape and we'll put it back up in a day or two, and life goes on at Fifth and Maine. We just keep moving past all the nuisances and that helps us move forward enough to stay in business.
Posted by Rodney Hart at 11:51 AM