THE TRUMPETS IN town decided to have a vehicle parade Saturday morning. They came up Maine Street honking their horns, driving people mad with obnoxious noise. There were a lot of pickup trucks with flags, a lot of revving of engines, and a lot of middle fingers sticking out of windows. It was classy for sure..

One of the flags had the slogan "No More Bullshit." Finally, something we can all agree on! When he came back again, and again, and again, the flag had wrapped around the pole sticking out of the pickup truck bed and you couldn't see it.

Look - I don't care who you like. Just don't honk obnoxiously, especially at 5th & Maine. Maine Street between Fifth and Sixth has tall buildings where the sound reverberates and amplifys. The horns were deafening at times, much to the delight of the Trumpets and much to the dismay of the people who live and work in the area.

The parade did nothing to sway anybody's vote - it may have deepened the resolve of the other side, and also motivated some from the opposing side to remember to vote on Tuesday. That's a win no matter how you think. Everyone should find time to vote this year.

They kept circling Washington Park and coming back. Suddenly two young people appeared on the southeast corner of Fifth and Maine with a sign that said "Honk 4 BLM." It certainly got quieter at the corner, and there were a lot of angry and confused looks from Trumpets as they drove by for the 10th time.

There was nearly a crash at the intersection when a vehicle stopped and the driver started yelling at the two young people. The vehicle almost got rear-ended by a large semi. The two young people came out into the street waving their sign and it nearly got very ugly. It wasn't a smart thing to do and they were lucky they weren't run over. They moved back to the sidewalk and I simply walked out and told them to please be careful. They stayed for about an hour. Happy to get some peace and quiet in the midst of all the buffoonery. 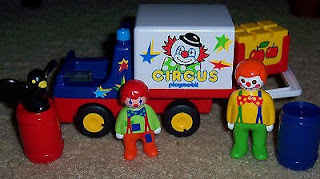 Others reported dangerous traffic on Broadway too. It was a clown car parade for sure.

Jump up and down all you want. It makes no difference, none. I made my noise by voting early and I suggest you vote, too. That's the biggest statement you can make, and it doesn't involve wasting gas or obnoxious honking. Tuesday can't come and go fast enough.