Back at QU Stadium

I DID SOMETHING Sunday afternoon I haven't done in years - I went to a Quincy University baseball game.

My buddy Bob Youngs is a coach for the Davenport University baseball team. Davenport is located in Grand Rapids, Michigan, my old stomping grounds. Bob, nicknamed Bones, works for Gus Macker in the summers and we've survived a few tournaments together over the years. Well, maybe more than a few. 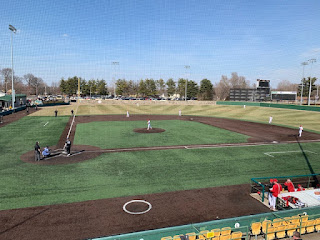 Davenport was in town for a four-game series against Quincy University. So I sat in the sun, met up with some old friends I haven't seen in a while, and really enjoyed the day. I think QU won 12-11, and it's early in the season, but it didn't matter. If it's the first weekend in March and you can watch baseball and not be cold, it's all good.

I'm not much of a baseball fan. I was a big fan growing up, first with the Montreal Expos, then with the Toronto Blue Jays and Detroit Tigers. But when the MLB season was canceled in 1993, I vowed to never pay to watch a Major League Baseball game again. And I haven't.

Big league baseball is all about one thing - money. You can have your Cardinal Nation and root for the home team all you want. All I see is a bunch of greedy men playing a child's game for greedy owners and greedy TV outlets.

That's what was nice about Sunday - these are college athletes. It's the sport in its purest form. And it was beautiful to watch. Hearing the ball smack into the glove, hearing the chatter from the dugouts, and even the metal ding of bat meeting ball brought back a lot of good memories.

Attendance was limited and there are Covid restrictions in place. You can sit virtually anywhere in QU Stadium and not be near anybody. And the stadium itself is not the same decrepit facility of 25 years ago. The University and Quincy Gems of the summer league have done an amazing job of fixing it up, though it still has an old-time stadium feel.

Hopefully there are a few more sunny Sunday afternoons when the Hawks are playing. Count me in on a return visit.