Farewell to family in the times of COVID

HENK HART DIED in Toronto Monday. He was 85. He was my father's oldest brother, the eldest of seven siblings, a Dutch immigrant and philosopher. Certainly he was the quirky Uncle Henk Hart. I have found out much about him in recent months, and he was a larger than life figure in many ways.

He had health issues in his last years. He knew he was dying, and predicted when he'd die, and he was close about that prediction. Henk's wife, Anita, passed a few years ago, and Henk's daughter, Esther, also died of cancer more than a decade ago. He is survived by his son Klaas (Anita) and two daughters, as well as Esther's daughter Sophie.

Uncle Henk lived life. He threw rocks at German soldiers in the Netherlands during World War II. He immigrated to Canada as a teen. He became a well-known writer, educator and philosopher in Toronto. He liked to travel and he was an avid birder. He was also a champion of the LGBTQ community being a part of his church, a controversial belief that strained friendships. This is putting it way too simply, but Henk thought the church should be accepting. He was way ahead of his time. 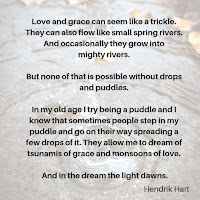 One of my fondest memories is when he and his siblings gathered at my Uncle Peter's house in Michigan 20 years ago for a family reunion. In the afternoon somebody broke out a concoction called "Opa's Gin" and the stories really started to flow. Henk was the ringleader and the laughter bounced across the Lake Michigan dunes and through the trees. He sat on the deck overlooking the big lake and beach, a big smile on his face and his binoculars handy in case a rare bird was sitting in a nearby tree.

In December, with the end in sight, a Zoom session was organized for family and friends. Henk looked well and delighted in seeing old friends, even if it was on video. In these soul-draining Covid times, Henk used the Zoom session as his funeral and farewell, and it fit his quirky nature. But if you think about it, if you know you are dying, why not have a virtual funeral and farewell while you are alive? You can't enjoy it and find peace when you are dead.

A few weeks ago Henk's sister, my Aunt Willa, lost her longtime companion, Ron. He was a few weeks shy of 80. He'd also battled health issues for a long time, and his death was expected, but no less painful. We didn't get to zoom with him before he died and are grieving alone because of COVID.

He was also a wonderfully different man who loved to play guitar and tell stories. I spent an afternoon on a Georgian Bay island beach playing guitar with him a few years back and it was one of the best times I've ever had playing music. Fortunately we didn't let the songs get in the way of laughing and being goofballs.

Both of these deaths have hit us hard. It has been a difficult year of isolation. Covid takes away from life, and end of life, yet again.

Henk and Ron are undoubtedly in a better place. It doesn't make it easier. The fact we can't gather to remember makes it worse.

Farewell, Uncle Henk. You were one of a kind. You will be missed. It was a life well-lived.

Farewell, Ron Marshak. You were a great guy, fun and talented. You will be remembered and missed.