IF AGE IS just a state of mind, then I mind it. Very much. But if it's the price you gotta pay to have a good time, so be it.

Sheryl and I are both recovering and grateful after an amazing Saturday night at Turner Hall for our Six String Heroes benefit. Along with the $3,000 donation from Blue Cross/Blue Shield, we've raised about $5,000 for the program, which offers free guitar lessons and guitars to veterans. Co-founders Steve Stoner and Kevin Sullivan were blown away by little old Quincy's generous nature. 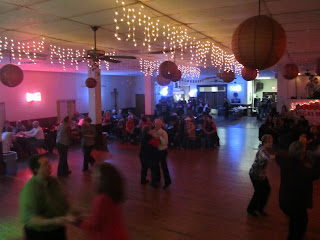 First of all, it was great to see Turner Hall packed. We had more than 350 people in the old concert hall and The Cheeseburgers appreciated it very much. It's a boatload more fun to play to a crowd that wants to dance, party and sing along. Vancil Performing Arts band, Clockwork, opened things up and had the place rocking right away. Lenny Alderton and his young students tore it up and did a great job.

A big thanks to Mark and Chris from Turner Hall, along with sound man Rollo Carder. When you call those guys and say you want to have a benefit, they say, "What do you need?"

This was a big night for our Cheeseburger roadie of Doom, Frank Haxel. We were hoping for a hundred people or so to show up. As the people poured in, Frank decided to have himself a good old time, and I don't blame him after all the hard work he put in to organize and promote the event.

My favorite part was jamming with young Glendon Griesbaum near the end of the night. I gave him my Kammerer guitar and he rocked right along with us, and the look on his face was priceless when Eric, our guitar player, came up to him and blasted out a solo.

Sheryl and I decided a long time ago to make Six String Heroes a main focus of our charitable efforts, and it's been huge and positive.

Whatchya say we do it again?

Just give us time to recover.