SHERYL WANTS ME to write a song about snowstorms in spring. Or something like that.

I used to make up a lot of songs, most on guitar. Most were awful. I am proud to say my old band, The Funions, recorded three CDs of original music. Some of the songs were OK. I have a bunch of songs on my Boss digital recorder that are OK, too. 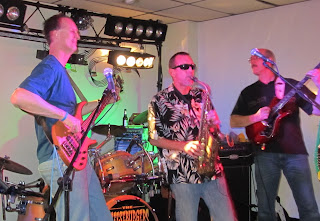 The last time I had to write songs for a major project was in 2005, and a lot of them were heavy and dark. You are what you write, I suppose.

So I'm thinking, what could I write songs about? It's time for me to get off my butt and just do it.

I could write songs about ....

- Snowstorms in mid-March.
- My daughter getting a full-ride graduate school scholarship.  Can I rhyme Cleveland and Julliard?
- Tucker the Wonder Dog running through the snow, FAST.
- How much fun it is to play with your best friends in Pepper Spray.
- New lesson rooms and old bank signs and haunted floors above Second String Music.
- Why companies won't hire a middle aged and burned out newspaper guy.  How about why companies won't hire my super smart wife with tons of computer and networking skills.  She gave up the search and we opened a music store...
- The city dumping a pile of snow on our corner at Fifth and Maine so people can't walk on the sidewalk.
- Coming up with blog ideas.
- Stepping in Bella's big piles of poo.
- Being fortunate with a great wife, an adventure with the music store and three smart dogs. Well, two smart dogs. Bella is still dumb.
- Sitting on a Lake Michigan beach. Already done that, but could do it again.
- Life itself.