THERE WAS A fascinating trial in Quincy last week for a motorcycle club member accused of pointing a gun at a rival motorcycle club guy almost a year ago. As usual, Don O'Brien of The Quincy Herald-Whig was the only media guy on top of the story, and his story is here. Sorry if The Whig blocks you out.

To summarize, two guys were at 12th and Hampshire when they were surrounded by gang members. The guy on trial pointed a gun, and victims' vests were stolen. The accused's attorney suggested it was just boys playing capture the flag.

Whatever. The jury thought otherwise, and our Sons of Anarchy boy is facing 30 years in prison.

Four people were arrested. The other three at least showed good judgement and hired a decent attorney. The state's attorney, however, was dealt a royal flush and has all the cards, and it will be interesting to see what kind of deals are struck, if any.

I am friends with one of the victims, a really good guy who was in the wrong place at the wrong time. He isn't scared of the other club members and decided to ride it out with the legal justice system, though the delays frustrated him. I don't know much about wannabe bad boy bikers, but they'd be stupid to exact any kind of revenge. Very, very stupid. 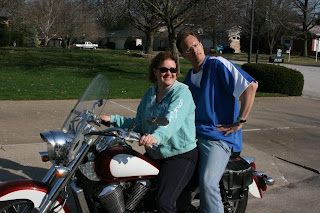 And all of this gives motorcycle enthusiasts a bad name. I don't ride (scooters don't count) but I understand the pull of the open road and wind blowing in the face, etc. I won't let a couple of idiots wreck my view of the majority of bikers, good people with passion for doing something they love.

Take your "capture the flag" crap somewhere else, boys. It doesn't fly in the Q-Town. Or ride, for that matter.