Never too late to Journey 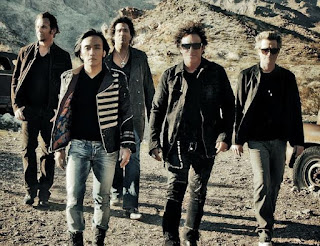 THIS NETFLIX THING is addictive. The other night I started watching the three-hour Eagles documentary and I couldn't stop until it was 1 a.m. Don Henley and Glenn Frey are absolute geniuses - I am using Eagles songs in guitar lessons and they are simple yet catchy, easy to play yet challenging. Yup, Life In The Fast Lane is a great song and the story behind it is even better. The tale of Joe Walsh and John Belushi running amok in Chicago is worth it alone.

Last night I got sucked into the Journey documentary, where the band discovers Arnel Pineda on YouTube and eventually makes him the lead singer. I'm not a huge Journey fan, but I'm starting to appreciate some of the songs a little more and Steve Perry's voice was incredible.

Sheryl just pointed this out - Arnel Pineda was 40 years old when he got his break of a lifetime and became Journey's frontman. Forty, of course, is The New Fifty - dare to dream!

The best part was Pineda's determination to deal with the Journey haters. People are cruel and Pineda didn't let it get him down. Playing music for a living isn't easy, and I have no way to compare what I do to a Journey or The Eagles, but man, you can draw comparisons. Nine years later he is still with the band and that can't be beat.

I highly recommend watching both documentaries.