THE NEW ADAMS County Jail should stay downtown, if possible. And I think it's possible.

The county is looking at four potential sites. Three are out on the east end of town. The two sites on 48th Street are not popular with the local residents - "Don't build a jail by my house" is the common rallying cry.

Of course, our current facility is right across the street from the Kroc Center, which is always full of young people and families and ordinary citizens. I hope we never have an escape downtown because there are a lot of good people down here who could be put at risk.

Wait a second .... I'm having nightmares of Richard Carr and his buddy bolting from Fifth and Vermont on a snowy night. Never mind. If we build it east of town, escaped inmates would not be able to saunter across the street and threaten attorneys, either. And vice versa.

We could build a new jail on the current site, but it would be four stories - translation, less safe. Also, there would be no potential to add cells and make it bigger.

Sheryl has always thought the old health department could be modified or rebuilt to become the new jail. Lots of room to create the right building on that site. That's a thought.....

The county needs to think about the impact of the jail leaving downtown. That's a lot of people who work down here. Many attorneys have offices near the jail. And it's much safer to take an inmate down an elevator and through a hallway right into a courtroom. Everything is set up. 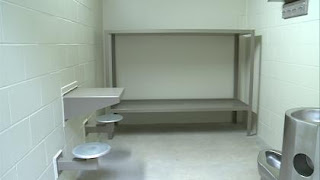 There is the option of putting it by the youth home out on 54th Street. Nobody lives next door, no one that is alive anyway. The huge detriment is the distance between that location and the downtown courthouse. There are long term cost and safety factors to address.

I have utmost confidence the country board considered different options ... right. Ahem.

I'm not hearing anything about the courthouse moving, but you have to wonder if that day would come if the jail is built on the east end of town, and then all the attorneys and other support systems moving out there, too.

If the jail moves, it won't "destroy" downtown, as one person put it. Downtown has weathered many ups and downs and will survived if the jail is moved, but it will put a damper on things down here.

Sheryl and I have invested our lives in downtown. We care about this place. There are many others who feel the same way. We think the courthouse and jail should stay down here.
Posted by Rodney Hart at 10:28 AM