WHAT A BLAST we had at the annual Hart family reunion near Orillia, Ontario. It was four days of driving and three days of fun in the sun, and worth every minute we spent in the car. We got to see Jon and Mariann Barnard in Kalamzoo to boot, along with Sheryl's Uncle Schuyler Davis, Aunt Connie and Cousin Bryan that live in Pontiac, Michigan.

We stayed at Geneva Park, a YMCA camp on Lake Simcoe, part of the Georgian Bay. Our Cabin was within feet of the lake and the beach. Except for not having bathrooms (they were a short walk away), the cabins are rustic and perfect. It's different for men, of course - third tree from the left, Hoser. They are updating the cabins and the new ones will have bathrooms, so when we come back in a few years it will be a little better. Sheryl adapted but does love a clean bathroom.

The best part about being there is the suspension of time. You do what you want, when you want. Heading to the Chippewa tribe-run humidor to get real Cuban stogies, duty free? Go for it. Jamming with cousins Klaas, Roland, Edward, Mark and Uncle Ron? Make it happen! Drink real Canadian craft beer for lunch? Done! Sheryl enjoyed the special roasted coffee created by Mark Hart, lots of fun and laughs with Natalie, Amy, Michelle and Ingrid - all Harts. It was incredible to hang with a bunch of family that actually like to hang out together.

My favorite part was when my Uncle Henk and Uncle Peter told stories about World War II in the Netherlands. My Opa Hart was active in the resistance and some of the third generation were held spellbound by the stories. That's going to be the subject of another blog, along with immigrants coming to Canada and later the United States.

Angus also had a blast - he's a water dog all the way and there were endless games of chasing sticks and Frisbee into the lake. At night he'd disappear and we'd hear splashing from the lake, and there he was, frolicking around and cooling off.

We had perfect weather, just perfect. Great company. Music all day and night. Geesh, it was a little slice of heaven. Even the border crossings were smooth, though we dealt with typical construction delays on the highways. Also, I-94 around Detroit is brutal, even worse than Chicago, and that's really saying something.

Our other dogs and cat were well cared for, and Steve Rees did his usual fine job manning the store. Now we are back and I'm recovering just in time for another great weekend, this time Q-Fest in Washington Park and on Maine Street in front of Second String Music. We are open Friday, Saturday AND Sunday (12 - 3 pm). Come by and hang out.

Thank you, Hart family, for an amazing time. We can't go every year, but already I look forward to the day we return! 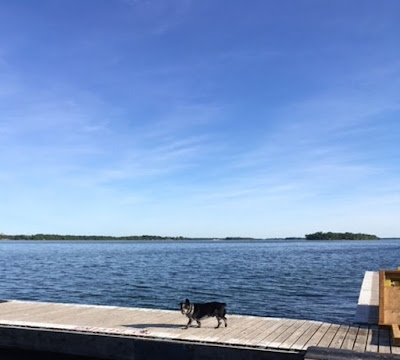