ALL ACROSS THE country Saturday, June 30, marches are being planned to demonstrate opposition to the policy of separating migrant families crossing the southwestern United States border. Quincy will have its own march Saturday at 10 a.m. in Washington Park. Join us at 5th & Maine.

It's being organized by Indivisible of Adams County. The march is designed to bring awareness of the policy, continued separation and how it impacts children. The focus is on a positive message of "Keeping Families Together." 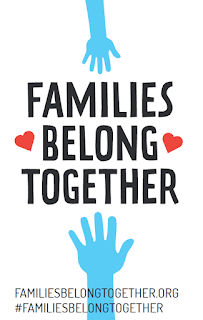 Participants are urged to wear white to show unity.

You can agree or disagree with so many of the issues. I am all for strong borders and legal immigration. I'm not sure how that translates into destroying the family unit. We are compassionate people. Keeping children away from parents seems barbaric to me.

Here is a bit more information from the group ....
As part of the administration's "zero tolerance" approach to illegal immigration, children have been separated from their families at the border while the parents are held for prosecution. Last week, the Department of Homeland Security announced that nearly 2,000 children had been separated at the border over the period beginning April 19 and ending in May. An unknown number of children taken from their families in June. There is no current plan to reunite these children with their families. Even though the revised policy claims it will reunite families, it may still incarcerate the whole family.
Our message is that Families Belong Together and children must be reunited immediately with their families.