YOU NEVER KNOW who will walk into Second String Music looking for an instrument. You never judge a book by the cover, right? Whoever said that probably worked in small business retail.

Saturday morning, Sheryl was off running errands so Steve Rees and I manned the store. In walked a guy who said he was just checking the store out. He sat down and started strumming some of our amazing Takamine acoustic guitars.

Next thing I know he comes up to the counter and says, "I'll take it." You would think after doing this for nearly eight years we'd be used to selling a beautiful guitar, but I still get a big charge out of it. He also got a case and some other stuff.

We are ringing him up at the counter when he looks at the wall behind me and says, "I'm working on his house." He pointed at Sheryl's picture of Roger Waters on the wall. In case you didn't know, Sheryl is a massive Roger Waters fan, both in Pink Floyd and his solo work. 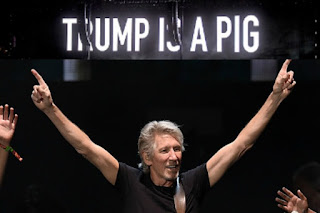 Turns out this guy is an electrician from Florida and flew up to the area to play at a family member's party. Southwest Airlines lost his guitar. Ooops! Southwest's blunder is our gain. "We are doing the electrical work on Roger Waters' house in the Hamptons," he said. "He's ... particular. Mostly we just deal with his entourage. When you've sold a million albums, I guess you can have an entourage."

So there you have it. We sold a guitar to a guy who is working on Roger Waters' house. Sheryl just missed meeting him and was sorely disappointed. "Tell him to come back!" she said. "Two degrees of separation is probably as close as I'll ever come."

Maybe some day Roger Waters himself will come in and buy a Takamine acoustic. What are the chances? About as great as his electrician doing the same thing. Right!
Posted by Rodney Hart at 10:39 AM