Critters in the cemetery

WE ENCOUNTER PLENTY of critters on our morning Woodland Cemetery walks. We've seen tons of squirrels and moles, of course. The dogs have kept the mole population down this year and have probably killed at least 30 to 40 of them. Moles breed by breathing air so poor Eric and his staff are constantly dealing with mole trails through the grass. So they like the dogs.

This morning Genie caught a squirrel, which then played dead as it hung in her jaws. Since it wasn't fighting back, Genie simply dropped it, and the squirrel got up, looked Genie square in the eyes and said, "SORRY SUCKER." Then it flew up a nearby tree and laughed like a maniac at the ticked off dogs.

A couple of weeks ago in the far southwest part of the cemetery we saw from a distance what looked like a large cat. It was reddish in color, and it kind of hard to tell because it darted into the woods, but I thought it might be a red fox. 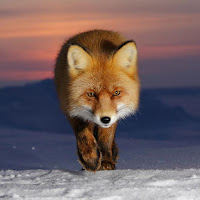 This morning, not 10 yards in front of me, the fox suddenly popped up. Tucker and Angus were off somewhere but Genie saw it right away and gave chase. It was no contest - the fox was a blur as it gathered momentum and flew down the hill. Genie chased it for maybe 100 yards, then gave up.

There are also deer, possums and raccoons hanging out in the cemetery. I saved a possum not long ago by the City Vault - it was so fat that it could barely waddle, and the dogs nipped at it a few times until I shooed them away, and off the poor frightened beast went into the safety of the wood.

There are also lots of hawks and bald eagles, especially when the river freezes up and then head over to the lock and dam to fish. You know there is something dead in the woods when you see the turkey vultures circling in the air and about to swoop down to pick at the carcass.

The dogs agree - it's a beautiful thing hanging out with all the creatures!
Posted by Rodney Hart at 11:36 AM