EVERY MORNING WHILE the dogs and I stroll and get ready for the day, Sheryl watches Perry Mason on our local MeTV station. I will sum up every episode, so apologies for the spoilers, but somebody gets murdered, the wrong person is arrested and hires Perry Mason, he methodically takes apart the prosecutor's case, and the real murderer breaks down in court and confesses.

Never mind that this is usually during a pre-trial hearing, not even the preliminary hearing or during an actual trial. But why let real life get in the way of "so good it's bad" 1963 television?

This morning, lo and behold, Perry Mason had suffered some unfortunate malaise and was in the hospital. In his place stepped up the legendary Bette Davis, playing a widowed attorney defending a James Dean-like young man falsely accused of murder. Again, I hate to spoil it, and I only saw the very end, but Better Davis runs through all the suspects and then points out the real killer. In the courtroom. Right. The killer breaks down and confesses on the spot with a maniacal laugh, and the accused breathes a huge sigh of relief as the camera closes in on the smirking and triumphant Betty Davis.

"I know, and they are .... piercing and disturbing," Sheryl said. "This is early women's rights!" 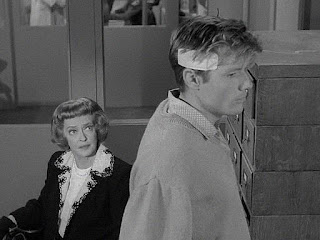 Actually, it's kind of cool. I'm sure Hollywood was a man's game back in the 1960s, and to have a woman portray a figure of authority and slick coolness was probably rare. Bette Davis pulled it off with a bad haircut and those eyes.

In the end, Perry Mason calls her from his hospital bed and says he is going to get better because the prosecutor can't take tangling with Bette Davis, and wants a fairer fight. Of course, Perry Mason went 255-0 during his days as a defense lawyer, but again, why let reality interfere with classic television?

Uh oh. Matlock just came on. Better turn the TV off and head to the store - not even Sheryl would leave Matlock on to torture the poor dogs while we are at work.
Posted by SheyFey at 9:54 AM