THIS MORNING WE were driving to the store and noticed a couple of police officers near Sixth and Maine. I went into the EFB coffee shop in our building, and the employee told us there was a guy with hospital pants, a hospital wristband and no shirt walking down the street and peering into the windows of parked cars.

Who knows what he was looking for. It's yet another reason to always lock your car, no matter where you park. 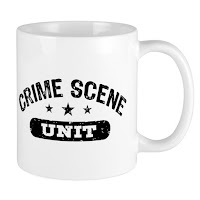 There was an EFB customer sitting outside who noticed the strange behavior. He wisely and quickly called the police, and they came down to take care of a person who obviously was having issues. He was in the back of the police vehicle when we drove past.

Thank you to the customer who saw something wasn't quite right and called. It's dangerous to assume what was going on, but the man who called did the right thing and may have saved a lot of trouble to the people who were parked on Maine Street and for the man in question.

The moral of the story? Always go to Electric Fountain Brewing for your coffee. (They have two locations now!) And don't hesitate to let authorities know if you see something suspicious, especially when drinking coffee! Yum, Coffee.
Posted by Rodney Hart at 11:49 AM