TIM SMITH AND I had a blast Saturday night at the Blessed Sacrament Septemberfest in Calftown. Anytime you get to hoot and holler four blocks from your house it's a good thing! Tim did a great job as usual, especially with the younger kids. It was a beautiful night and there were a ton of people milling around the Eighth and Monroe parking lot.

If a young person displays talent in the arts, it's important to expose them to playing live and dealing with the public. We had two good examples Saturday night. First, Emmy Kistner came up and played "Free Falling" by Tom Petty. Emmy is a fourth-grader at Blessed Sacrament and had quite the entourage there to cheer her on, and she killed it singing and playing her guitar. A fourth-grader playing a Tom Petty song? Tough act to follow .... 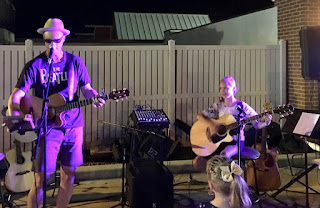 A few songs later, Madison Daggett joined us to play guitar on Wagon Wheel. Madison has been one of my best guitar students at Second String Music for a long time and she has come a long way. When I asked her to play with us about a month ago (she is a fifth-grader at Blessed Sacrament), she got super excited and said yes right away. I could see a little bit of fear in her eyes at first when we started practicing, but by Saturday night she was primed and ready, and she plugged in her guitar with no fear and flashed a huge smile.

I can't tell you how proud I am of Madison, who is always cheerful and grinning from ear to ear. She kept perfect time and even helped me when I got off the rails for a few measures. Geesh. Maybe this wretched human race does have a chance, if Madison and Emmy are any indications.

I've had many students of all ages go from not knowing a thing to strumming and humming in front of people. It's a beautiful thing. I've often thought of having Second String Music recitals, but I'm not sure we really need to do something like that - to be honest, many students don't want to have anything to do with playing live. It's a whole different animal, and I would never force a student to be uncomfortable in front of a crowd.

Then again, a little student jam session on a Saturday afternoon wouldn't be a bad thing to do. Hmmmm ....

It was a great night and I'm am one proud teacher. 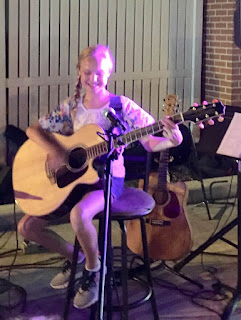