The wrath (and rash) of Angus

ANGUS HAS BEEN itchy lately. We are curious as to why dogs get skin rashes and how to treat them. Sheryl usually gives him a doggie benadryl and it helps, but last night he was really miserable and licking his belly.

Sheryl finally gave in and gave him a bath, and used goat's milk soap on his skin. It helped and Angus has stopped being so itchy. Angus doesn't mind getting a bath, even if it's after a tangle with decomposing squirrels or other other disgusting substances he encounters on our walks. 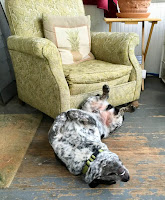 Right after his bath this morning, we took the dogs for their usual run. Angus dug up a mole and had a lot of fun spraying dirt all over the place and the other dogs were impressed with his mole-catching skills - Genie and Tucker are usually the ones who do the actually catching.

So Angus went from a very clean and good-smelling dog to being covered in dirt and dead mole, and he loved every second of it. Sheryl used a dish towel to wipe him off and it was entirely filthy by the time she was done.

Dogs really don't want to be clean. But they don't want to be miserable and have to scratch that nasty itch all the time, either. Angus got the best of both worlds this morning, and he is one happy doggie!
Posted by Rodney Hart at 9:47 AM