New keyboard, boxed up or set up

A WOMAN RECENTLY came into Second String Music and ordered a very nice Casio Privia PX 770 keyboard for her daughter. We are Casio dealers and didn't have it in stock, but we match the internet price and it comes with a free bench, so she was thrilled we could get it in for her. 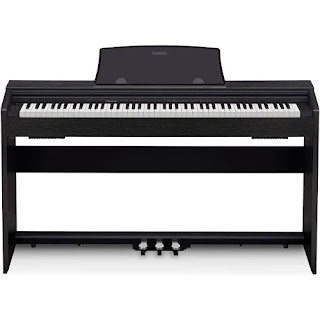 We got it out of the box and Sheryl put it together. I helped by disappearing in the back room, eventually coming out and handing her the directions and a flashlight as she lay on the ground and stared blankly at the underbelly of the keyboard. She finished just in time for a rush of school band instrument rentals (yesterday was violin day, for some reason), and it's ready to rock and roll.

The woman has two choices. She can either take home the assembled keyboard, but it will require some strength and finesse to transport. Or she can take home the keyboard still in the box, which is as long at the Mississippi River and kind of bulky, but much easier to move.

Part of us wants her to take the boxed Privia so Sheryl doesn't have to put together another one, though the second time will be easier, and I don't have to pull a hammy by handing her directions and pointing at holes where the screws go.

Either way, we are here for our loyal Second String Customers, and we'll make it as easy and painless as possible to take home your new instrument!
Posted by Rodney Hart at 10:28 AM