SHERYL'S BLOOD SUGAR machine died the other day. She ordered a new one. She says there is a spare unit in the house somewhere. "Now I just have to remember where I put it," she said.

Famous last words. But I relate because I am always misplacing stuff, and, in order, I tend to lose my keys, wallet, watch, keys, shoes, mind, coffee cup, beer and keys. At least it happens all the time and enough to remember I am my mother's son.

This morning Sheryl went into the bedroom and there was a lot of crashing and scrapping noises as she searched for the elusive spare machine. She hasn't found it yet, but in the meantime she's lo 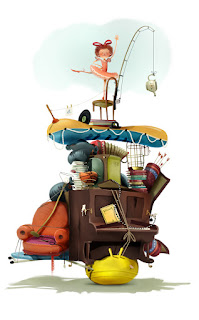 cated other valuable items like cords to charge phones, sunglasses, dog and cat collars, ancient wedding invitations and milk punch cards. Well, the last two items are things I'VE found in the last few minutes as I search for my keys. Again.

This prompted the suggestion to "have a garage sale" with all the trinkets, gadgets and generally useless items (to us). I could volunteer a lot of old cords and probably make a mint (haha, breath mint maybe) selling my vintage Gus Macker swag. There are stereo speakers, guitar cases and way too many ball caps laying around the upstairs rooms. So I could contribute.

"While you are looking for stuff you could go through all those boxes upstairs and throw away all those old newspaper clippings," Sheryl said. "And maybe you'd actually find your Canadian citizenship card."

Sheryl and her sister, Stephanie, had a garage sale at her old house before we moved into the Hart Manor in 2009. I vaguely remember moving stuff into her old garage and then purposefully staying out of the way as Sheryl and Steph expertly priced and sold all kinds of junk. Err, stuff. Err, valuable items to other people. Who knows? We may have accidentally sold my Canadian citizenship card.

So hang on to your hats, Q-town. The mother of all garage sales could be looming to a Calftown alley garage near you soon. Sheryl says maybe next year but I'll start making posters, as soon as I find my glasses.