Eddie was an alien

SHERYL ASKED IF the rest of this week and next would be "Van Halen Week" in guitar lessons. 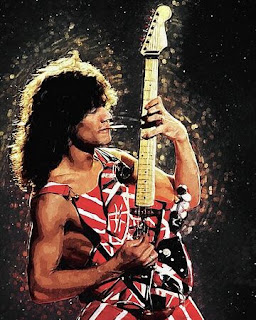 I can't do what Eddie Van Halen did on the guitar. I can't even come close. So I don't even try. I can show guitar students how to do tapping on the fretboard, and explain how Van Halen made the noises he did, but to replicate it would be silly.

Yesterday afternoon I had a couple of younger students simply listen to "Eruption." The noises coming out of that guitar still sound other-worldly 42 years later. The expressions on their faces were priceless. So yes, there will be listening and appreciation, but not much copying what he did.

RIP, Eddie. More than your blazing riffs and frenetic solos, I'll remember you for amazing songs and a love of the guitar. Rock lost a giant yesterday and nobody, nobody, will ever be like him.