I HATE ELECTIONS. They turn sane people into morons. They turn people against each other. Blind ideology replaces common sense. It's two weeks until Election Day, 14 long days, and I can't wait for it to be over.

I made the mistake of accidentally watching one minute of a local TV station's newscast last night. It had a nationally syndicated report about reporter fraud. It was among the most one-sided and stomach-turning propaganda pieces I've ever seen. I quickly turned the TV off. I will never, repeat, NEVER, watch that station's newscast again, and I won't click on their website either, even though it's a source for local news. Pathetic. I have friends who work there and it's sad.

Look. I don't care if you are an R or a D. I am neither. I vote for the best candidate, regardless of party. I've already voted. If you want to know who I voted for, come talk to me. But only if you are a registered voter, and only if you want to discuss reasonably. Lies and propaganda aren't allowed. 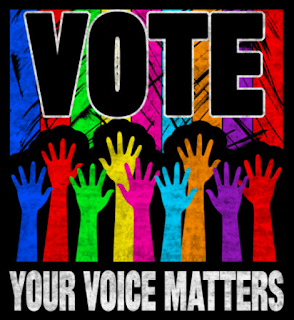 Who cares? If a big sign is going to sway you one way or the other, you got much bigger problems.

Instead of obsessing about the other guy, focus on the issues. Contribute to your candidate's campaign. Encourage people to register to vote. And, of course, get out there and vote. Every vote does count no matter how often you are told it doesn't. REALLY.

And when this bleeping thing is over, it's over. We have always survived a 4 year presidential term and we will continue to survive presidential terms. We move on, work harder and pray for our country to be better. No ranting and raving allowed after November 4th, it won't end well if I have to hear it, promise, because I'm already tired of all the bullshit and I want it to be over.