JUST WHEN YOU think 2020 can't get worse, you learn one of your early musical heroes has passed away.

Eddie Van Halen was a punch to the gut. The news this week of Tony Lewis passing away at age 62 won't have the same impact to most, but it's knocked me down and I'm having trouble getting back up.

Tony Lewis was the lead singer and bass player in The Outfield, an English band who released the epic Play Deep album in the mid 1980s. I may have listened to Play Deep every single day of my senior year at Central Michigan University, and that's not an understatement. 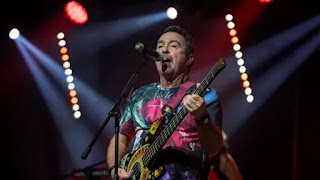 Most people know The Outfield for "Your Love" and "Everytime You Cry." But the entire album rocked and didn't have one bad song. Every now and then I'll get out the Outfield's greatest hits and remember, but this morning I'm actually cranking out Play Deep and going back in time.

Some of my more musically-inclined friends made fun of my love for the Outfield. It's OK. It's not even a guilty pleasure. I just like their songs and the guitar tones and Tony Lewis' voice.

Good lord - "61 Seconds," "Mystery Man" and "Say It Isn't So" are pop rock masterpieces. It's literally been 30 plus years since I've listened to Play Deep front to back and it's still a beautiful thing.

John Spinks, the guitar player, died six years ago. Now Tony Lewis is gone, "unexpectedly" according to his website. And another part of my younger self is gone, too.

At least I can still listen and go back.