SHERYL GOT AN email this morning via the store from a person in South Africa. They have an old violin and written on a label inside the F hole is the name J.A. Carpenter, 1526 N 8th, Quincy, Illinois. A violin maker in Quincy?

Sheryl likes doing research, so she looked up Carpenter and Violin on the Quincy Public Library's historical archive newspaper site. Turns out there was indeed a James Carpenter who made violins in Quincy. It's quite the story.

J.A. Carpenter moved to Quincy in 1912. Sheryl found an article about him in 1913, he was accused of passing off a fake $10 bill to buy something. Apparently he sold a violin and got an altered $1 bill, and he vehemently protested his guilt despite the evidence. He was referred to as a "strolling musician" and was the brother of William Carpenter, who was a "well-known police character." He swore that he had received the fake bill from someone buying one of his violins and was just trying to get rid of it so he could recoup his money from the violin sale.

In 1960, the newspaper did a story about Carpenter. He lived at the Illinois Veterans Home and he still had a work shop at 1526 N. Eighth, near the veterans home (it appears to be a vacant lot now). In that small workshop Carpenter made violins, selling a few to children and then a limited number all over the country. 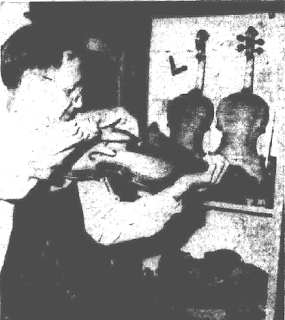 The article implied he didn't make much money, and it took him three months to make one of his better violins. The paper describes them as exquisitely carved out of different kinds of  woods. Carpenter said his better violins sold for between $500 and $1000.

"Some day the work of the frail, bespectacled Quincyan may be hailed as ranking with the great master violin makers of past centuries abroad," the paper stated.

The person in South Africa was grateful for the information. How the violin traveled across the world is probably another great story. Sheryl was glad to help them find out more about their instrument, and now we know more about a musician from yesteryear in Quincy.