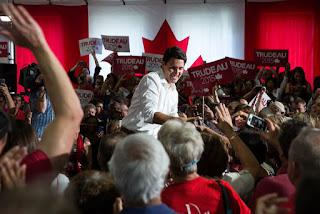 CANADA HAD A federal election Monday. The Liberal Party dominated and nearly 70 percent of the population voted. That's 70 percent.

There are lessons to be learned from any election, particularly one just north of the border. We here in the states tend to live isolationist lives and not really care what happens around us, or bother to learn more about our neighbors.

I'd jump up and down and get mad about the fact you don't know how many provinces Canada has, or what the capitol is, or where to cross the border, etc. But I know nothing about the countries to the south of us, and don't really care, so I can't preach. Plus I grew up in Canada and my daughter now lives in Toronto.

You gotta love a country like Canada that actually has a Green Party member elected to Parliament, and has three major parties, and even has separatist goofballs as elected officials. As we work our way through the horror, silliness and downright inane behavior in a major election, it's nice to know other countries have the same issues.

Go Canada. Take off, you hoser. I'm glad you voted before you did.