The world can't end yet

THERE IS A "Christian" group in Pennsylvania saying the world will likely end today. Like all delusional whackos, or Donald Trump, they are wrong.

- My new glasses just arrived and I haven't worn them yet.

- We have incredible new Breedlove guitars to sell at Second String Music.

- Cori Lyssy and I are learning a mid-80s Madonna song and to deprive the masses would be criminal and unholy. Plus Hartlyss has a righteous gig Oct. 24 at Martinis, literally two doors down from SSM.

- Genie, our new Aussie, is beginning to obey on our walks and not poop in the store. She's also promised to not eat my glasses again. Ahem.

- Michigan has two straight shutouts and looks like it might be on the way to a very good season.

- The Cubs are in the playoffs. Geesh ... the world might be ending soon, after all.

- Somebody found my wallet and returned it to the Adams County Courthouse yesterday. I didn't even know I'd lost it. Fortunately there was nothing in it, per customary arrangement. 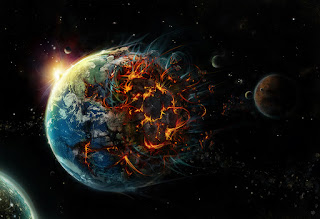 - The Cheeseburgers are playing at the QU football game tailgate party on Saturday, Oct. 31. The vibe out at the newly renovated Rock is supposedly off the charts. The game starts at 11 a.m., so we play at 9 a.m. Every gig has a story!

- Nobody, repeat, nobody, knows when the world will end. To suggest otherwise is blasphemy. The punishment for making false predictions is being forced to listen to new country.

- We're having too much fun at Fifth and Maine. The world can't end now!
Posted by Rodney Hart at 10:41 AM