WARNING: This blog contains graphic depictions of a baby bunny being killed. If you like bunnies, don't like bunnies who die, and don't like dogs that kill, go back to watching the morning talk shows. Thank you and don't say anything to PETA about this.

WE ARE LIVING with a murderer. His name is Angus The Young. He is small and has his mother's ferocious Corgi temperament, and his Cattle Dog father's good looks. Don't be fooled by his cute heine, his crazed half smile, or the way one ear stays up and the other folds down. Angus The Young is a stone cold, remorseless and crazed killer.

It started a few weeks ago when mama bunny had baby bunnies under our back porch. We sealed it off and scolded Angus for trying to break into the bunny nest. Let her and the bunnies be, we said. 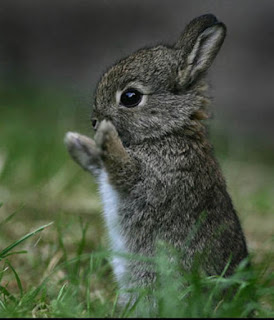 No problem, Angus said. I swear his eyes turned blood red and his head turned all the way around when he agreed, but I could be mistaken.

The little bunnies got a little older and soon began hopping around the yard. We found one dead by the garden, mangled really. Disposing of that was retched.

Mommy bunny and sibling bunnies continued to bounce under our back shed area and wander aimlessly around the yard.

Another bunny was found bloodied a few days later. No suspects around but two happy go lucky dogs were happily dancing around it. Strange.

Then, yesterday morning, it happened. Sheryl was getting ready for her high school sub assignment. She looked out the backyard and saw both Angus and Tucker jumping around and poking at something in the grass. She walked up to the dogs, and then she heard a sound.

"It was a baby bunny. I heard an 'EEP' so I knew they had him," Sheryl said, lifting her black veil so I could see the anguish on her face.

Was it dead right away?

"Well, I saw it blink a few times," Sheryl said.

I was instructed to check on the crime scene after she left for school. I did. The bunny was dead. Angus and Tucker were quite proud, standing over the little bunny as if to show me their handiwork. "This is just like when Bella used to kill moles on our cemetery walks," Tucker said, tongue lolling and eyes squinting in the morning sun.

"I did it," Angus said, sniffing the air to make sure there weren't any other bunnies in the yard. "I am a proud Cowboy Corgi. Killerz. Tucker helped."

Part of this is really sad. Here is an innocent baby rabbit, trying to make it's way in the world, waking up after a long night's sleep, only to find himself in a fight for his life. Quickly dispatched.

Then there's the dogs, who simply think baby bunnies are play toys. Really, they don't have any idea the bunny has feelings, or that their teeth penetrating soft bunny skin is fatal, or that baby bunnies can't play after they are dead. Sheryl didn't see any baby bunnies in our backyard when she let the dogs outside. The bunny was there, the dogs were there, and the results weren't pretty.

"Can I have a treat now?" Angus finally said.

I just hope PETA doesn't show up with signs demanding bunny justice and that Angus serve time. If so, I will sue the Bunny Union for trespassing and unlawful birth of baby bunnies on our property.

It's just dogs being dogs, the cycle of life, and another morning of mayhem in Calftown.
Posted by Rodney Hart at 12:37 PM