OUR NEW CAT, Josie, is growing up. She is now wandering around the backyard, keeping an eye on things. Don't worry, she is fixed and she doesn't go far.

This morning she climbed our backyard tree and caused a fuss with birds who have a nest up there. Then a neighborhood stray cat poked his head over the fence to check things out, no doubt smelling the patch of catnip we have growing by the shed. 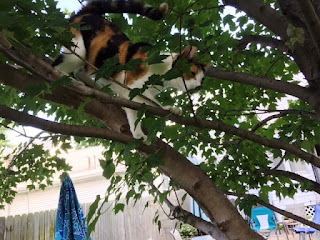 The dogs chased the stray off, though Josie was intrigued and made strange noises at the other cat. There's another cat from a few houses down and I think they are cat buddies. I imagine they go on cat play hunts and exchange cat gossip - "Dude, that catnip patch is beyond wow, me-
ow," neighbor cat says.

I think it's great that Josie is an outdoor cat. She is very good at helping Sheryl weed the garden and at patrolling the fence so nobody gets into her catnip. That she knows, anyway. She is also quite lazy and will wallow on the patio monitoring the backyard for hours.

Our friend Josh Brueck had a hilarious Facebook post the other day - Josh was trying to swat a moth and his cat simply nabbed it out of mid-air, ate it, and looked at Josh like it was no big deal. Same thing with Josie, who is really into bugs, birds, spiders and anything that crawls or moves.

Ah, the life of a cat, especially a cat who thinks she is a dog. Go get 'em, Josie!

Just don't drag it back into the house.
Posted by Rodney Hart at 10:30 AM