ABOUT THE ONLY good thing to come out of yesterday's horrendous shooting in Alexandria was when Live With Kelly and Who? got pre-empted. Now people are calling for more civility and unity, which is usually the case in the wake of tragedy and evil intentions.

I'm all about it. Maybe we should have a baseball game between Rs and Ds every week. If they got along better, our government would be better.

I hate politics in general, mostly because politics means going to meetings and failing to compromise. At the state level, I think our government is a joke, a laughing stock, and I'm embarrassed to live in Illinois due to posturing and preening politicians who couldn't care less about us, the people.

It starts at the very top. It's not about disruption and treading water only on your side of the bay. It's about working with everybody. These are all high and mighty ideas and they sound great. But why is it once you slap an R or D on your chest, you are pretty much useless and you fall right into the same old trough of bipartisanship? 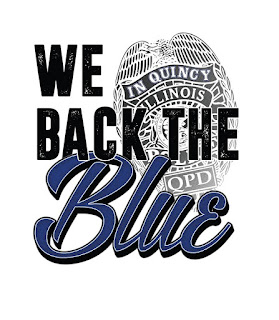 It makes me angry just to think about it, which is why I'm focusing on what the Capitol Police did and how it could have been a lot worse.

On Saturday, July 8, we are having an appreciation day for our local police, fire fighters and emergency responders. It will be in Washington Park starting early in the afternoon. We'll have more details soon, but let's just say it will be a big party and a way for all of us to give thanks to the guys and gals that protect us from so much danger.

So I'm not letting some POS from our state who nearly caused a horrific massacre bring me down. In fact, I'm not thinking about him at all after I write this. Pray for him and family if you want, but don't dwell on him or what he was doing.

United. We. Stand. And keep July 8 open to show your appreciation to those who keep us safe.
Posted by Rodney Hart at 10:39 AM