All love in Washington Park

WITHOUT FANFARE, A significant event took place in Quincy Sunday night. "Stand Together In Love Quincy" was organized in response to recent events in Charlottesville, VA. It was put together in just a few days by Rev. Tony Metz and a few others, and it took place in Washington Park.

It was very simple. There were a few speakers, and the idea was to let everybody know we will not tolerate hate or ignorance. Others stood up and made a one-sentence proclamation about what they stand for, and why. And Second String Music legends Ted Holt and Pete Magliocco performed from the gazebo and were amazing. To me, the best part was hearing about 300 people sing along  to "Blowing In The Wind" and "We Shall Overcome."

There was no sound system, which I think added to the ambiance of the event. Yes, it was hard to hear if you were in the back, but there was no PA when Lincoln debated Douglas on the very same spot, either, and they did just fine. 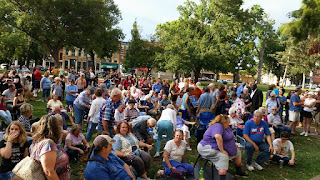 There were so many people from different walks of life, not just the ones fighting injustice and providing social services in Quincy. The messages were clear, it doesn't matter who you are - we are the same inside, and there is no room, NONE, for hate.

To the many of us who showed up, it was powerful reinforcement that we aren't alone, that reasonable people have voices, that there is no place for hate. It was an event to help others see that there is support in the community for everyone.

We now have signs in our store and at the house stating "Hate has no home here." Much love and kudos to Tony and the organizers, and it's good to know we are strong and we will stand up to hate in our community.
Posted by Rodney Hart at 11:26 AM