Blown down in storm coverage

WE'VE BEEN WATCHING a lot of storm coverage lately. Hurricane Irma is winding its way up the Florida coast and into Georgia, and we get to watch a lot of windblown TV guys getting soaked and telling us it's really windy.

Sheryl, as always, is entertaining when we watch such things. "Get inside, you big idiot!" she screamed at one of the hunky CNN reporters. He was wearing waders and a black T shirt, and having trouble standing up in the 120-mph winds. Then they cut to Anderson Cooper. "You are STILL on the air?" Sheryl said. "GET SOME SLEEP." 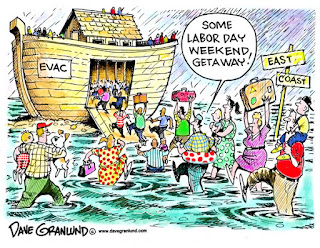 At one point yesterday, a reporter was doing a live shot from the "eye of the storm." Apparently when the eye passes over, the rain and wind stops, but it picks up again. "What are you doing? You are going to get whacked here in a second. LEAVE!" Sheryl said. But the guy didn't listen and he kept talking about flying debris and power outages and why everybody else should leave Florida.

Sheryl grew up in Florida and was taught much about what to do in a hurricane. She gets stressed when people put themselves in danger. I think they should listen to her.

These hurricanes are no laughing matter, and my heart goes out to the millions dealing with flooding and damage. But after a while the coverage becomes a bit numbing and it's hard to comprehend what is happening.

Many times I had to write about storms and floods and pestilence. It wasn't hard to find the human element and tell stories - they told themselves, really.

But I was always glad I was a newspaper guy, and not somebody standing in the storm of the century.
Posted by Rodney Hart at 10:36 AM