WE ARE MAKING progress on getting a new roof above the 2nd floor of our Second String Music building. Let's just say we are now good friends with our banker and a local roofing contractor. Work should start soon, which is good for my aching back. I made five trips up to the crawl space yesterday to deal with all the melting snow and leaks, and the sooner a new roof goes on the better.

I read with interest the story by The Whig about the Kinscherff Center at 122 N. Fifth, half a block to the north of us. The building next to the center, the old Irene's Cabaret, flooded a few months ago and caused serious damage to both buildings. The center is used by John Wood Community College for adult education classes, and JWCC staff had to evacuate because walls started buckling, among other issues.

Mike Elbe, JWCC's president, says the school is committed to the location and is awaiting word on repairs. The city isn't talking about what happened, and probably wisely so since there might be litigation involved down the line.

But we can tell you from talking with our Fifth Street neighbors and a couple of the water department guys who were here when it flooded that both buildings suffered serious damage. The old Cabaret building has been vacant for more than a year and is owned by an out-of-town person. A pipe burst in the basement and ran unchecked for a long time. That's the danger of having a vacant building and an owner who isn't here in town.

I'm not saying this is the case here, but often if the owners don't live here, they simply don't care. Sheryl and I dealt with this in our previous location, and one of the reasons we bought our building was for rent control and to make sure somebody who gives a damn about Quincy owns it. We can't imagine the problems this building would have if it were unoccupied.... 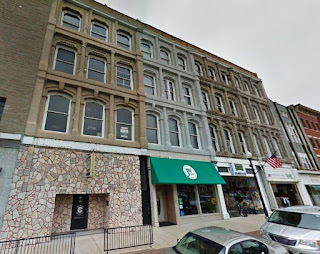 Another huge issue is that all of the buildings are interconnected, from Schuecking's clear down to Fifth and Hampshire. If the two damaged buildings have to come down (I'm not saying it's going to happen, just if it happens), that puts a big hole in the middle of the block and all the other buildings could be subject to significant structural integrity issues.

Then again, it might help us with some of our downtown parking issues. Just kidding. Sort of.