OUR ROOFERS ARE hard at work on our Fifth and Maine second floor roof as we speak. They are removing the two large skylights and prepping for the removal of the roof material, since they are completely rebuilding it. Much love to Jeff Schuecking, our next door neighbor, who graciously allowed the roofers to use his parking lot for easier roof access. It's saving them a lot of time and hassle.

Man, I'm gonna really miss inching through a dark and dirty crawlspace to check on buckets when it rains. The last few times we've had rain and melting snow it's been really bad, and we're tired of it.


There's a support beam on the far east side that is rotting from water damage, and it's dangerous to go back there now, so it's past time.

The problem was that this building was empty and neglected for too many years. When we first got in here, we had no idea the leaking was so bad. On New Year's Eve 2012, The Cheeseburgers had a show at One, and it started to snow and rain. Man, the water just poured down into the back area - Frank Haxel and I had to keep running back and forth from the gig to the store just to empty the kiddie pools full of water. We finally figured out they had a sump pump in a garbage can in the crawlspace to catch the biggest leaks, and it's all still up there and still pumping when it rains. 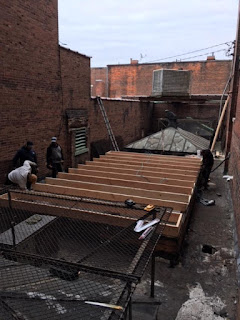 We wrestled with what to do with the skylights. The project would have been cheaper if we'd kept them. But most of the panes of glass are 100 years old and cracking, and there is no purpose to having them up there - you can't see them. At one time they were part of the heating and cooling system for the building, but long ago drop ceilings were installed so you can't see them from the inside, either.

All they do is leak and rust. It's sad, but they gotta go.

Yesterday Sheryl turned on the water to the second-floor bathroom, and something went wrong with the sink. Suddenly there was water pouring down into the coffee shop immediately below. She got it stopped but it leaked for a few hours - I am grateful for the patience and support of EFB's owners and staff, and really it was no big deal - nobody got wet and now we know the sink needs work.

Ah, the joy of owning an old building ...

Anyway, the roofers are up there hammering away, and every now and then we hear a BOOM and a POP when something falls down. It's music to our ears, knowing we'll soon have a new roof.
Posted by Rodney Hart at 11:58 AM