THE FIRST OF many downtown outdoor music events starts in the less than three weeks. It's finally starting to feel like spring and we are going to be rocking and rolling down here.

Concerts In The Plaza is sponsored by The District, First Mid-Illinois Bank, Second String Music and Vancil Performing Arts. It starts April 26 with Cheeks McGee and there are three more Friday afternoon shows until we move things over to Washington Park. Click here for the list of performers and more info. 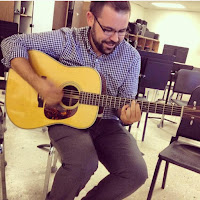 We started this event a few years ago as a late brainstorm idea to get more people to come down here, and it's really taken off. If the weather is decent, you'll have 100 or more people down there and the Butcher Block does a great job of providing lunch.

The Plaza is a hidden gem downtown. It's tucked away in the 700 block on the north side of Maine Street just before you get to the church at Seventh and Maine. It has a massive stage and plenty of green space to stretch out and enjoy the music. We appreciate John Johannes and the great people at First Mid-Illinois Bank for letting us use the space.

We are working on the Acoustic Corner shows. Blues In The District is the second and fourth Fridays in June, July and August, and we'll have a solo or acoustic acts play at Fifth and Maine in Washington Park at noon that day. We've also got a stellar lineup set for Q-Fest at the end of June.

I think I'm gonna grab and some coffee and sit in the sun before another day of lessons at Second String Music. We are ready for another great summer!
Posted by Rodney Hart at 9:56 AM