WE KNOW WHAT happened to the missing Gretsch guitar. Yes, it left here without permission and caused us a lot of stress. But we'll chalk it up to a giant misunderstanding and eventually it was figured out.

Somebody, and I won't mention any names but his initials are RODNEY BEEPING HART, didn't lock the door Saturday night after we closed. Actually I did the first time but I came back with Tucker to grab a guitar and I must have just brain-farted and not double checked that the door was closed and secured. I didn't alarm it because I had to come back later for something else. Sometimes the door doesn't close by itself and you have to push it in and hear it click to make sure it is locked. Details. They are important.

We have a customer, a really good customer who has purchased a lot of stuff from us, come by Saturday around 5:30 or so. He thought we were open until 6 (we aren't, just until 4 on Saturdays). So he came in and looked around and didn't see anybody. He had his eye on the beautiful Gretsch and sat playing it for some time, waiting for someone to appear and help him. He started to feel uncomfortable sitting in the empty store, and for some reason he decided to take the guitar and the case. He had a guitar in for a restring so he knew he would be back on Monday and would take care of it all then...

We are still not sure why he at least didn't call us or leave a note or something. At least we wouldn't have FREAKED OUT on Monday morning. Let's just say it was a very looooonnnngggg and stressful day in the store. We felt exposed and angry that someone would steal anything, let alone that beautiful Gretsch. 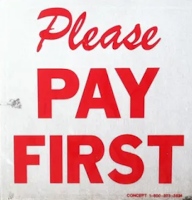 He came in Monday afternoon around 3:30 with the money, and quickly realized he'd messed up. He was very apologetic and he paid for the guitar in cash. Then he bought another guitar. Sheryl had a long "talk" with him about it because by then I was in guitar lessons. She is straightforward and polite but firm when we have problems. I'm really glad she handled it.

There was a misunderstanding because he told me he wanted the guitar, but I wasn't sure when he was coming back. I assumed it would be while we were open. He meant no harm and he thought we'd know he was the one who took it and would be back Monday to pay for it.


There was a lot of discussion about the fact the door wasn't locked. That's on me. I try to always double check it, but will do more than try from now on. And next time I'll just set the alarm, even if I'm coming back soon.

Thank you to all of our awesome Second String Music customers for sharing news of the missing guitar on social media and for having our backs. We are here because of you and your support means a lot.

Just another adventure at Fifth and Maine!
Posted by Rodney Hart at 9:59 AM