I AM NOT sure what is more amazing - the fact I was spending my first Christmas in Alpena, Michigan some 30 years ago, or the fact that a contest I started as sports editor of The Alpena News is still going strong.

I have no idea what prompted Beat The Geek. It was a college football contest and it was written by my alter ego, The Geek. We took all the bowl games that year, made a list, and invited people to pick the winners and send the form to our office. I even went out and got the prizes, and one day in church little Eric Lindsay gave me a drawing of The Geek, and we used it on the entry form. 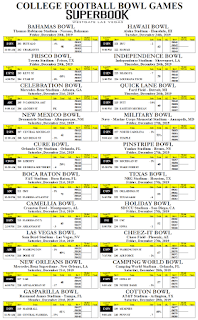 It grew every year and become wildly popular. At first I tried to keep track of the entries, but later I enlisted Eric's mother, Vicky, to help me. Vicky and her friend Liz Klemens were invaluable to keeping the chaos in control, and I recall going across the street to the Lindsays on New's Year's Day, back then the last day of college bowl games, and putting all the entries into neat little piles so we could keep track.

People asked me if I was The Geek, and I always denied it. The Geek was a mythical figure who lived under the Second Avenue Bridge. He could get away with stuff in his stories about Beat The Geek. Bill Speer, still the man in charge at The Alpena News, let me get away with a lot of stuff in those days and I constantly pushed the envelope, since it was just a one-man staff.

So imagine my surprise when the sports editor of The Alpena News, James Anderson, contacted me and said he was doing a story about the 30th anniversary of Beat The Geek. It brought back a flood of memories and I'm glad the contest is still rocking along all these years later.

I was in Alpena from 1989 to 1996, and I loved it. The many years away have only made me appreciate Alpena even more.

This year, I might have to enter Beat The Geek, unless I want to give everybody else a chance...
Posted by Rodney Hart at 12:17 PM