WE ARE RENAMING the 505 Maine Recording Studio the Bat Cave. 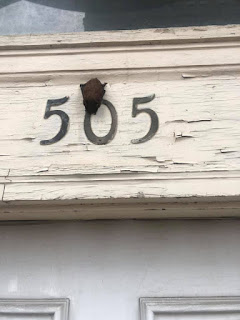 Last week, the little guy landed above the door and right by the 505 Maine number. He just hung there. Isaac Smith, studio owner, noticed him and his wife, Brittany, took a picture and declared him "kinda cute." Bats and cute aren't necessarily what we think of, but he wasn't bothering anybody and you had to look closely to see him, so we left him alone.

He hadn't moved for a day or two so I took a closer look. Isaac and I both thought the bat was dead. Brittany poked at it and said it "felt warm and alive." Sheryl thinks it was just sleeping. I checked this morning and the bat is gone, so maybe he was just taking a little nap and has found a warmer place to sleep.

We've been fortunate there haven't been issues with bats, as they like old buildings. We noticed a bunch of them across the street a few years back, and then there was the epic encounter during a Blues In The District show inside the store. There was a lot of whacking and lunging involved in trying to get the bat, and the fact we'd been on the sidewalk all afternoon didn't help matters. Emily's friend Carly finally nabbed it with a towel and set it free in Jeff Schuecking's parking lot.

So Happy New Year to the bat, and to all of you as well. And just like the bat, feel free to hang out at Fifth and Maine!
Posted by Rodney Hart at 11:07 AM