Not watching the big game

THE MORAL OF this story is to never watch your Michigan Wolverines get pummeled in the annual rivalry game with that school to the south. You'll just break your TV.

We had a huge Friday in the store after Thanksgiving. Saturday morning we were expecting more of the same. So I brought my nice TV to the store with the hopes of watching the big game. It started at 11 and I figured I could sneak a few minutes here and there catching some of the action. 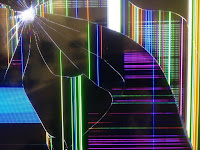 When I plugged it in, there was a large split going down the middle of the screen, and it never powered up properly. Not sure how I managed to break it, but I did.

So I didn't watch, and as it turns out, it was a good thing. We were busy in the store and before I knew it the game was over and the other team won. By a lot. BLEEP.

Saturday night we had to run some errands and we ended up getting a new TV, plus one for the store. So there's little chance I can break either one, though anything is possible.

Take solitude in the little things, like getting a new TV and the fact we don't live in that state that starts with an O.
Posted by SheyFey at 11:29 AM