I HAVE A lot of Frank Haxel stories. It has been a few days since his death and memories have helped get me through his sudden passing, though I don't think any of us will get over it.

Here are just a few of those many memories.

One Saturday afternoon 8 or 9 years ago, The Cheeseburgers had an issue with getting our trailer to a gig that night at Adams Trading Post. We had also just lost our roadie. Frank happened to walk into the store.

"Good. What are you doing tonight?"

Thus began Frank's tenure as Cheeseburger roadie, which he continued until a few years ago. We had so many good times - Frank often drove our drunk you know whats home with Kirk Gribbler's gibberish and the sound of snoring as we all passed out. One day we took the dirt road shortcut to get to Keokuk, and Kirk warned Frank about a steep hill. Frank didn't listen. Let's just say we renamed that little stretch of road "Frank's Hill" to remember when he almost careened off the road. Then there was the time he made Tim Lawless get out to move a roadblock and then drove off without Tim getting back in the Suburban.

Frank loved our store parties. He made the Beer Can Bowling frame and he won the first-ever tournament. He made a scaffold for the legendary Second String Music pinata blow out, and the video is at the bottom of this blog (Thank you Table 16 Productions). "Swing hard and drink up," he said, perfectly summarizing more than a few Fifth and Maine celebrations. Near the end you see Frank with the scaffold rope, which was typical - we'd all be partying and he'd make sure the loose ends were taken care of.

He liked his Coors Light, for sure. Our Friday happy hour sessions could either be a nice mellow way to end the workweek or turn into a full blown party.

Frank helped with our District music events. Maybe four years ago Super Magic Robots were playing for the street party at Fifth and Maine, and we were standing beside the stage. A drunk guy lurched past us and started accosting the lead singer. The bass player just looked at us and motioned to help, so Frank and I got up on stage, grabbed the guy by the arms and dragged him off. The band never stopped playing and security guards met us at the bottom of the stage stairs.

We took some amazing plane trips with Adam Yates and Tim Smith. The first one was six years ago to my uncle's Lake Michigan beach near Holland, Mich. We slept on the beach and had a big tent set up, but Frank simply grabbed a lounge chair, wrapped himself in blankets and fell asleep under the stars. At about 3 a.m. he woke Tim up to point out the Space Station zipping across the sky - never mind we'd seen it about six hours earlier on the deck.

He was passionate about our Six String Heroes program. He was often in tears when the Blue Cross girls would reveal a massive check for them at a store gathering. We had a party at Turner Hall to raise money for Six String Heroes, and Frank told his friends and the band (Cheeseburgers) to put our drinks on his tab. I'll never forget the next afternoon, the fog still lifting, and Mark Mester handing Frank the bar tab. And Frank paid it without complaint.

The last time I saw him was a few weeks ago at our Cheeseburger show at Red Light in Quincy. Kirk and the guys mobbed him on our first break and they were laughing about all the crazy nights and stories. 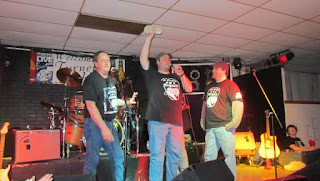 I think this is the best story - we had our one-year anniversary party at the old location and a ton of people showed up, with a big old jam session and all kinds of fun. Frank had never really seen something like this, and I'll never forget standing outside the store and Frank saying, "That's the power of music."

I'm glad his last years were full of music, from Vancil Performing Arts to the many shows and concerts he worked, and the mayhem at Fifth and Maine.

Geesh, Frank. Save us a seat up there for Happy Hour, and someday we'll laugh our heads off all over again.