IT'S VERY WINDY at the corner of Fifth and Maine. This is normal and we are used to the wind tunnel, as we like to call it, since our building and the WCU Building across the street form a perfect jet stream area.

The front doors at Fifth and Maine keep opening and shutting by themselves. It's annoying at best, and sucks the heat out of the first floor at the worst. So Sheryl has taken the pins back out of the doors and locked them, for now. That means you'll have to tug and wait for us to open them.

The more I think about it, the more I think it's not just the wind opening our doors. I think two people are responsible - Hattie Dodd and H. Schroeder.

Hattie Dodd was the woman who built and owned our wondrous five-story structure in 1897, and named it after her father. She only lived a few more years after the Dodd Building was constructed, and I wonder what she thinks of it today. For many years it was in decay. We are trying to bring it back. I hope she's proud, and I bet she's coming in and out just to see what we've been doing. 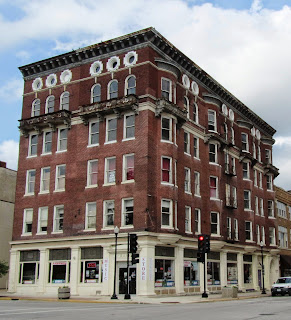 The other person is this mysterious H. Schroeder. I don't know much about him, only that he operated the original business on the corner where the door is located. When this building opened there were five businesses on the Maine Street side, including one operated by Schroeder, described by the newspapers of the day as the best-known and oldest druggist in the city.

It looks completely different now - Mercantile Bank bought this building in late 1905 and revamped the first-floor space. One of these days I'm going out to the Mercantile headquarters on 33rd Street, since there are supposedly photos of Fifth and Maine back in the day. I suppose a banker or two might be still trying to get into our building.

So if you are coming to visit today, tug the doors and give us a second to open them, and say hello to Ms. Dodd, Mr. Schroeder and various other dignitaries opening and closing our doors today.