OUR GOOD FRIENDS in the Rockin' Jake Band are on the road right now and were the victims of theft the other night. Jake and the boys are from Florida, and they were up in Topeka, Kansas, for a show. While the band stayed overnight at a hotel, their trailer was vandalized and several items were stolen.

The thugs took guitar player Mark DeDominicis' two guitars. Fortunately he has another one to play. The dirtballs also took pedals, microphones and gear belonging to Jake, who sings and plays harmonica. 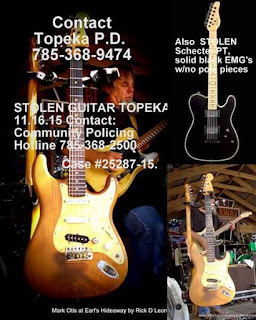 There are few worse feelings in the world than being the victim of a theft. The thugs used bolt cutters to slice through the lock and grab the stuff. You have to wonder if they really know what they've stolen - all they probably see are dollar signs. Good luck trying to pawn that stuff off in the Midwest, jerkoffs, because the word is out and we are watching for the stolen items.

I had a gig bag stolen from my car last year. It had cords, microphones, tuners, strings, all the little stuff. It was probably worth $400 or more. But it's not just the net worth - instruments and gear are special. They become a part of what you do and who you are. We really hope the thieves get caught.

Not that lowlifes who steal stuff in Kansas will try to pawn it off in Quincy, but you never know.

The day after the thefts, Jake and the boys ran into bad weather heading to Colorado, and they had to wait it out for a night in a small hotel until the roads cleared. Here is to hoping they have better luck during the rest of the tour. There are good people out there who will help the band out, I'm sure.