Lofty goals at Fifth and Maine

SECOND STRING MUSIC is located inside the historic Dodd Building at Fifth and Maine. Sheryl and I are excited to be part of The District's Loft Tours on Dec. 4, and we are proud to show off our progress since we bought the building a few years ago.

Hattie Dodd had it built in 1897. Mercantile Bank bought it in 1905 and it became known as the Mercantile Bank Building. The bank left in the early 1960s, the start of a serious decline for the grand old structure.

When Sheryl and I bought it in 2013, we were the only business and the four floors above us were vacant. Frank Haxel renovated the far east end of the first floor, where the original bank vault still stands, and it was home to Vancil Performing Arts' Dancer's Dream store for about a year. The space is open and up for lease again. 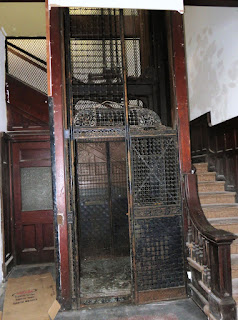 The second floor was renovated and is now home to Missy Myers M2 Photography and MO ILL Studios. Both tenants have done an outstanding job of renovating their spaces. Missy will be in her studio on Dec. 4 and will be proud to show it off during the tours. You'll also get a look at the amazing 1920 Hollister-Whitney birdcage
elevator just off the main entrance of 505 Maine St.

The third floor is still in decent shape, but there is no power or plumbing. The fourth and fifth floors are long gone, ruined when a previous owner failed to fix a leaky roof. You'd pretty much have to start over if you wanted to renovate up there.

The Loft Tours on Dec. 4 are from 5 p.m. to 8 p.m. There are three lofts on North Sixth and one near Fourth and Hampshire on the tour. Here is a link to the FB event.