QUINCY HAD TWO high-profile murder trials in the past few weeks. Both defendants were found guilty. One jury took less than 90 minutes. The jury yesterday in the Gavin Masters murder trial took more than five hours.

I covered about half of each trial for the Quincy Journal. I would have predicted the jury times the other way around. But you can never tell what a jury will do, because they are made up of human beings. Jurors are supposed to check all prejudice and judge the case solely on the evidence .... but that doesn't always happen. 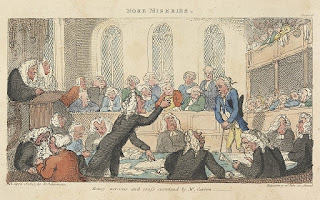 The Steson Crider murder trial dragged on for nearly two weeks. There was a lot of evidence and a lot of testimony from "profoundly imperfect people," as State's Attorney Jon Barnard put it. But the jury took a relatively short amount of time to find Crider guilty. I think jurors were tired and basically figured it out quickly. The victim was a completely innocent 12 year old boy waiting for a ride home and sitting on a front porch. I think the jury got it right.

The Masters trial took only four days. Again, there was testimony from rather challenged people, if you want to put it politely. The man shot to death was fleeing from a house after stealing a bag of weed, and defense attorneys Drew and Casey Schnack were brilliant. Their job is to throw up smoke and make the jury consider all kinds of possibilities, to muddy the waters. Nobody is better at it than Drew - if I ever got into trouble, he'd be among the first people I'd call.

I have not talked to anybody who served on either jury. But I suspect there were one or two jurors last night who were hung up on some issues and who were seriously considering a not guilty verdict. All 12 have to agree and it only takes one juror to halt the whole thing - I saw it happen in several major trials during my years at the Whig, including one case involving a man accused of beating an infant child. One juror refused to budge. The verdict came back not guilty. Many of the jurors were crying when the not guilty verdict was read, because they knew they got it wrong. But that's our system, flawed as it is.

I have a feeling attorneys, investigators and Judge Robert Adrian, who presided over both trials, will appreciate a few days off and time to reflect, and maybe to sleep.

There's always another big trial looming, and another jury to pick.
Posted by SheyFey at 9:49 AM