Jamming and way outta my league

SHERYL AND I ended up at the Club Tavern Saturday night to "celebrate" her birthday. Actually, it was to celebrate the fact that the three-week "Vortex of Crazy" before her birthday has ended. It's a long story and let's just say we survive it every year, and we are ready for the Christmas season.

Anyway, there was a big old jam session going on and I ended up jumping into the fray. Tell me there is anything more fun than getting to play with guys like Paul Lester, Rick Parrish, Shawn Buckner, Mike Carter, Carson Gay and the incredible Matt Roberts - more about him in a minute.

Most of your basic blues songs are just three chords and the truth and the arrangements aren't that tough to follow. Of course Carson had to remind me on one song that I was completely out of key (it was a little hard to hear, normal for a jam session). I got asked when it was over if I'd ever played with those guys before, and the truth is, no, not really. It's just an ear thing, which is how I learned, and you just do it. There's nothing that hard about it. 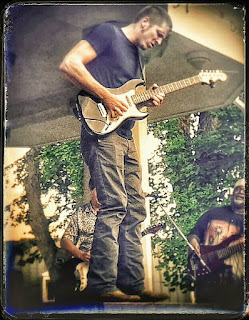 All of the above-mentioned musicians are way out of my league. It's a hard thing to explain, but when I got done I felt honored and grateful they even let me plug in and play, and I hope I didn't screw them up too bad.

When we got done, Matt said to me, "Man, you gotta play more leads!" Well, I flunked Lead-Guitar 101 many years ago and could never pass the class, though I like to mess around. I'm just an old strummer and hummer, a rhythm player who tries not to mess it up.

Playing lead guitar means practice, knowledge of scales and the ability to both let it go and concentrate at the same time. That leads us to talking about Matt Roberts, who has come a million miles in a very short time.

Seven or eight years ago I saw Matt jamming in a backyard for a benefit, and I thought he was pretty good. He spent many an hour perfecting his craft, because how he's the premier blues guitar player in the area and his showmanship and singing are top-notch.

Some of the nationally-touring blues guys who have passed through town have said the same thing. Matt and his band are now playing in St. Louis and other places, trying to get noticed. They are that good. Shawn Buckner on drums and Mike Carter on bass make for a killer trio.

Great fun with great people, and we lived to tell about it yet again.
Posted by Rodney Hart at 10:42 AM