EVERY NOW AND then we get really cool used gear to sell at Second String Music. Our latest fun toy is an EVH 5150 III 50-watt tube combo amp. EVH stands for Eddie Van Halen, and now you can sound just like him!

Well, not really, but you can have a lot of fun trying.

The proceeds from this amp go to Six String Heroes. It's basically brand new and is selling for a lot less than the new price. If you are looking to up your game, this amp is for you - it's good for practice, recording or gigs and has amazing tone.

Look. Eddie Van Halen is a pioneer and genius and guys like him are just wired differently. Nobody sounds like him and that's what makes him great. Sure, he flies around the fretboard like a madman and makes noises previously unheard from the guitar, but the best thing about him is his tone. When you hear him play, you know it's him. 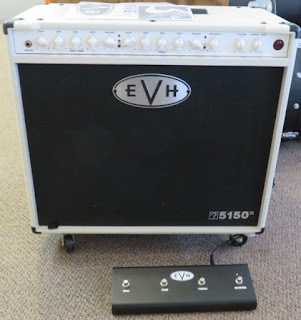 I couldn't care less about the whole Sammy vs. Dave thing. I just like the fact they are still going. And they have great songs - when they come on the radio or CD, you automatically turn it up and sing along.

I plugged this amp in and peeled the paint off the walls - it's one of the loudest combo amps I've ever played. It's fun to pretend you are Eddie Van Halen. I am not. In fact, when you watch and hear him play it's enough to want to either get better or just give it up.

I don't think it will be here long. Even in little old Quincy, Illinois, there has to be a player out there jumping at the chance to own an incredible tube amp. Come check it out at Fifth and Maine! And bring a paintbrush so we can touch up the walls after you are done.
Posted by Rodney Hart at 10:33 AM