I BROKE DOWN and bought tickets to see The Who in St. Louis. They play March 26 at the big arena downtown. We have really good seats and a downtown hotel room, so Sheryl and I are making a big weekend trip out of it. My brother Steve is flying in from Phoenix with his son, Riley, to see the show and hang out. We're going back in time to have the time of our lives, and I can't wait.

I've chronicled my obsession with The Who many times. They were the first band I really got into. It was all about energy and frustration, something a lost and clueless teen needed. I defy anybody to come up with a better album than Who's Next. I used to crank up the cheap boom box, lay on the floor and stick it right in front of my nose. 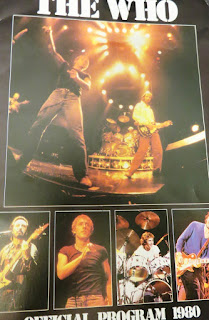 I remember all the words. Most of them, anyway.

The Who were an uneven and fractured band at the best of times. It made them all the more identifiable and Who fans are nothing but loyal to a fault. Our good friend Dave Griffin just gave me a 1980 Who concert program, and this was around the time they were recording Face Dances. The program features more stuff about Pete and Roger doing solo albums than about The Who. It's an utterly fascinating moment caught in Who time. It's at Second String Music if you want to take a look.

In 1982 I saw The Who at the Pontiac Silverdome. We didn't have great seats. The sound was awful. It reeked of pot smoke and gigantic corporate rock. It wasn't the best of experiences. But in December of that year, when they played their so-called final concert at Maple Leafs Gardens in Toronto, I recorded it on that cheap boom box since it was broadcast live on WLAV in Grand Rapids. It was the night of a school dance, but I holed up in my bedroom at 2351 Rosewood and lost myself for several hours. It sounded incredible to me, not like the records at all, much more about the waves of noise and energy.

In 1989, Steve and I saw The Who again at the Pontiac Silverdome. This time it was much better. I had floor seats from row 39 and I sang and screamed my head off for nearly three hours. When you know every song ... Again, the sheer volume and energy was off the charts.

I've had chances to go since and just couldn't make it work. Now they are out again in what will surely be their last tour (right?). Roger Daltrey turned 72 today. There is far less stage gymnastics, but I did see a few YouTube videos of their show from Detroit the other night and they sound in fine form.

I have very few bucket lists in life, but one is to meet Roger and Pete and actually talk to them about life in general. You know, a pub chat over a Newcastle Ale or lemon tea, so the voice stays sharp. I probably would be in such awe I wouldn't know what to say - but they've been there before and could carry things, I'm sure. (If Sheryl were there she would treat them like regular customers of Second String Music. She's casual that way.)

Man. I can't wait. I apologize to nobody for my unabashed love of a band still out there, still playing music, still registering. I'll be deaf for days and hopefully lose my voice again. I will spend too much on a T-shirt and take a bunch of blurry pictures on my cellphone and just completely forget where I am for a couple of hours. (Sheryl will get some great shots with her real camera too.)

Rock and roll, after all, is about the great escape.
Posted by Rodney Hart at 10:41 AM