Tucker poised to top the Madness

EVERY YEAR, MY brother Steve puts together an NCAA men's basketball tournament contest. It's just for fun. We sign up through ESPN and it keeps track of everything.

Hart Family Madness (a worthy and multi-purpose title) features family and friends. Pets are encouraged to enter, too. My sister's cat, Borachio, is dead last among the 20 entries. But my sister, Charys, has suddenly lurched to the top of the standings by going 4-0 last night. 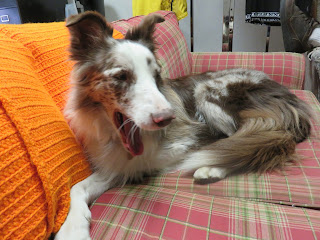 I filled out three entries. I'm in 11th and have no chance of winning. Angus and Tucker entered and it's funny how it works out, and how picking brackets are nothing but pure luck.

Angus is the sports-minded one. He thought long and hard about his picks before entering. He went with a lot of upsets and long-shots. He picked Xavier to win it because he likes the letter X. It hasn't worked and he's only a few points ahead of Borachio, and he is NOT happy. Grrr.

Tucker didn't think twice about his picks. He went mostly with favorites but tried to rhyme them with treats and squirrels. When that didn't work, he guessed. Wheeee.

You gotta remember that Tucker is more interested in marching bands than March Madness. He'll watch Dancing With The Stars and critique the costumes before giving two rips about slam dunks or zone defenses. Yet here his sits, poised to win the whole dang thing.

Tucker also went 4-0 last night. He is in third. He is the favorite because he has the most teams left and the most potential points on the board.

"Woof," he said this morning, when informed of his good fortune. "Did Duke lose? Good. I hate them. Where's my treat? And can I come with you to see The Who?"

Tucker takes the madness all in stride. If he wins, he's promised to lead Angus and Genie around the block in a victory strut, and tree the odd squirrel or cat along the way.