IT WAS GREAT to see our good friend and musician Jack Inghram in the store Monday. Jack is winding down a long career as a Quincy attorney and still has a few loose ends to tie up before officially moving to Austin, Texas. His daughter is down there and doing well as a lawyer. 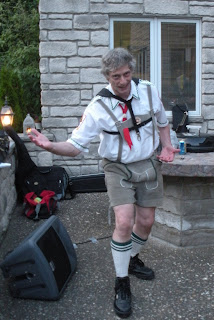 Jack played in The Funions, Reasonable Doubt, Heidelberg German Band and numerous other bands. He's a killer sax and keyboard player, and you can hear him on the Freddie Tieken & The Rockers CD, for sale here at Second String Music. In fact, Jack played a pivotal role in the early days of the band, detailed in fascinating glory here. When Freddie came back a few years ago for a Mendon schools fundraiser, he revived the band and Jack was in the thick of it, wailing away on his sax and having the best time.

There is a big concert for Quincy native Bob Havens next month. It's a fitting tribute to a legendary player. One of these days we might think of having something like that for Jack. I'll be the first to sign up and help organize it, for sure.

Jack is heading to Austin tomorrow but does plan on coming back from time to time. It would be great fun to jam again with him someday. I know a place at Fifth and Maine where we could meet ....
Posted by Rodney Hart at 10:14 AM